The key to the ivory tower 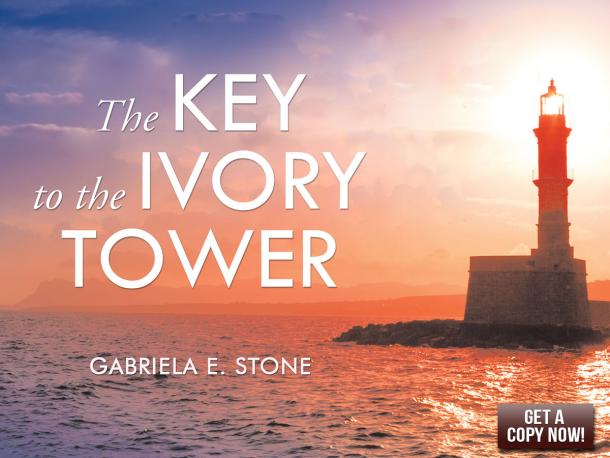 The Key to the Ivory Tower is a stylish, sweeping and erotic periodic- novel that tells the story of Catherine Acton.
Catherine is the only survivor of a noble family after a mysterious fire broke out in the mansion in the middle of the night claimed the lives of her parents.
Fifteen years later, Catherine returns to the estate where she finds love and discovers her femininity. However, the ghosts of the past return to settle scores long thought forgotten.
This novel will take you on a page-turning story in a fascinating environment of the 19th century. From France to England with a taste of Scotland, you will discover since then that not much has changed.

Old George Wilson stood on the deck of his boat, overlooking the sunset. It seemed as if it was savouring its last minutes in the world, before it dived from the bloody red sky to die in the sea, leaving the orphaned land grieving in darkness.
The belly of the ship contained the smuggled merchandise that George and his men worked so hard to get.
George took a pipe out of his pocket and absorbed it. It was an epic piece of art that had been smuggled from Africa. The bowl was made of pure ivory elephant tusk that had shaped like an African-bearded- old man, with fleshy lips, thick nose and short curly hair. It had two earrings, one on its nose and another one on its left ear. Instead of a hat, something that looked like a crown of feathers placed on its head.
The shank was its throat and had shaped like a necklace with stony beads. Each stone had embossed with a mysterious letter. The part between the filter and the lip was entwined with pieces of gold and silver. The expression on its face was the same one as its owner's, drifting with thoughts. It looked like something between a leader of an African tribe and a pirate captain. There was an engraving written on it saying, "For my dear father on his fiftieth birthday".
George returned to look overboard until he could see the land gradually appearing on the horizon. He took a sip of his small bottle of rum, and let it slip down his sore throat.
His eyes were welling up with tears as he remembered the day he almost lost his mind when the police came to inform him about the death of his only son.
George lit up his pipe and deeply inhaled the thick smoke. The vision of his son was still haunting his tortured soul, every time George had found himself in the darkness, and he deliberately summoned that vision, by closing his eyes and smoking from his son's present, as if he was performing an ancient ritual.
At the back of his mind, George could still hear his own screams echoing "Christian…"
George never knew if he was the lucky one. Anna could not bear the thought. Only God knew how much George had hated her, for leaving him at the most difficult time of his life. The thought alone was enough to summon the old chest pains he occasionally suffered from.
George suddenly shuddered, at the sound of the man behind him, clearing his throat.
"Sorry to disturb you, George…The sacks are ready with the supplies. We are getting close to shore, are you alright brother, can I get you anything?"
George turned around to face his younger brother Jack.
Jack was his right hand and the only one who was responsible for George's sanity.
One look at his only brother in his deep depression was enough for Jack to find himself floated in his own grief.
He approached George and placed his hand on his shoulder. “It's time to leave, ” he said with a comforting smile. They both knew he was not referring the boat.
“That little devil knew exactly where to find rare pieces, didn’t he”? George smiled proudly. “There wasn’t a land that didn't know the soles of his shoes. ” He added. Jack looked silently at his brother, knowing that the only way to pull George back into reality was to change the subject. "Come on brother… you need to lead the men," he said, tapping softly on his shoulder.
Jack knew he had to keep an eye on his brother, and there was no better way to do so, rather than becoming a smuggler himself, and join George in his trips.
Ever since that cursed night, and for the past fifteen years, Jack had never left his brother’s side. George went below the deck to the storage area at the bottom of the ship.
Jack delayed few more minutes, trying to compose himself. "I miss them too…, ” he said in almost an inaudible tone, before he followed his brother and disappeared into the depth of the ship.
George stood among the men, at the centre of the cabin, next to a large table. On the left corner of the table, there were small leather sacks of coins. On its right side, there were glasses filled with Whiskey.
“We have a new partner who agreed to give us a hand. We can store our cargo at his place overnight. However, we will need to be there early in the morning to evacuate the supplies and spread it to the shops. In return, I have offered to sell him our alcohol and tea, for half the price he can get it, released from taxes. This is for your good work, and you shall get the rest tomorrow after we’ll take the supplies, ” said George indicated the coins on the table.
One by one in perfect order, like trained soldiers, the men approached the table. Each one took a sack of coins and a glass of Whiskey. They all cheered and had a short break before they had started downloading the cargo to the carriages that were waiting for them on the shore. The night was bright and the stars above illuminated their way towards the new stop- station, where they were about to meet their new ally.

Customized Candle Boxes Packaging and Their Benefits
by: Beack Kendall