I went out to steal the Mona Lisa

“Shit! Damn French people”! I yelled furiously.
Right, as a guy that steal from the French for living it’s a bit rude to slander the French, but no theft I ever made came anywhere near what they did to me at the hotel: 70 Euros for breakfast, for some stupid croissant!
Ironically, the money I used to pay for the breakfast was stolen, and they can claim stealing from a thief is justified, but heck, what about the rest of the people!?

You must be asking what I’m doing in France. Well, it all started a week ago. Like every lazy thief, I wanted to do a big score and chill for the rest of my life. Unfortunately, the luck really does seem to go with the good fellas, and my plan was botched when I broke into the Italian embassy right in the middle of a sex party (yep, I guess Berlusconi isn’t the only one), and I found myself in France trying to steal the Mona Lisa with a dumb Italian called BoBo. Go figure.
I never realized what the Mona Lisa is doing in France, since Leonardo Da Vinci is actually Italian. The Italians must have not understood that either, and when they offer you 5 million dollars to do, as a proud thief you gotta go for it, especially if you screw the French on the way.
The plan was pretty simple, right on the line of the stupid riddles like how to put an elephant in a refrigerator. So how do you steal the Mona Lisa? It’s very simple, you just enter through the window, take it, and leave. If things go wrong I could say I tried to restore glory, bring things back to the way they used to be. After all, the Italians gave me a false identity, and the last Italian that tried to steal the Mona Lisa only got one year of prison. 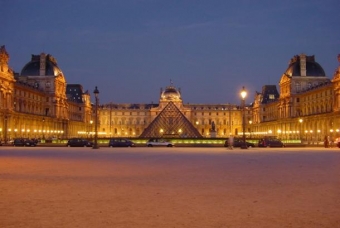 The big night came. It was 2 am when we got to the Louvre. While BoBo was armed with a gun, I had a knife, some break-in tools and a gun filled with some narcotizing bullets (after all I’m a thief, not a murderer). BoBo’s job was to distract the guards outside the museum. Some people are big on faith, others even believe horses can speak Hebrew, but nobody thinks that French people can speak English. This made for an extremely funny event as BoBo tried to distract the guards with some questions, in what quickly became a hilarious demonstration of curses in Italian and French.

None of that mattered to me. I was all in on my mission. I reached the window and shortly thereafter I was inside the museum. I knew the root by heart – that’s what happens after visiting the museum for 5 straight days before the robbery. Nothing got me out of focus, not even the guards who were long into their beauty sleep when I passed by. I reached the Mona Lisa and shattered the glass that surrounded the portrait. The alarm went off. I returned the gun back to its place and took out the knife. If anybody tries to shoot me, they should realize the picture will be gone as well. That’s how I got out of the museum.
The minute I was out I saw BoBo holding one of the guards as a hostage. The helicopter that came to help us escape was already there, and in a few minutes we were both up there, happy and satisfied.

Dozens of million Euros were promised to whoever found Mr. “Leonardo Da Bullshit”, who turned in a couple of hours from another alias to a national enemy in France and a national hero in Italy. Sometimes I was sad that I couldn’t tell anybody about it, but when glory and freedom lined up against each other it was always the latter that won.
“History repeated itself”, were the titles in France and Italy regarding what happened.
“Oh you bet it did”, I thought to myself. Just like with Reuven Atar in 93’, again one Israeli managed to screw an entire French nation.

The life after Death
by: Eran Shmuel